James and I took today off so we could go to a few baby shops and get the ‘big ticket’ items that we need. Big day… Before we went shopping I had a very fixed idea in my head in relation to the pram I wanted. James and I had both been doing some online research, particularly on the Choice website. I’d narrowed it down to two choices – the Bebe Care Rverse XLR and the Bertini I Ride, both highly recommended by Choice. Unfortunately no one in Perth stocks the Bertini I Ride (ba-bow!), so that was a non starter as I wasn’t comfortable just purchasing online without being able to take it for a ‘test drive’. Turns out that was a good move (more on that later).

I did find a store that stocked the Bebe Care, so off we headed to Baby Bunting in Perth’s southern suburbs. I must say, the ladies at Baby Bunting were excellent. Very helpful and knowledgeable in regard to the many, many, many prams and carseats on offer. I advised the sales assistant helping us that I was pretty sold on the Bebe Care, as I wanted a pram where the baby could either face you or face out to the world, plus it was high on the Choice list. She dutifully showed us all the features of the pram and then also took us over to the show us the Steelcraft Strider Compact which hadn’t even been on my radar. My immediate thought was, hmmm, quite a bit more expensive – is she just trying to get a better sale?? After demonstrating all the features of the Steelcraft pram and then taking us through the carseat options, the sales assistant left to give us some time to have a play with both prams and consider our options. To our untrained eye, both prams had issues – I found the Bebe Care awkward to fold down and James was concerned about the fold down clip on the Steelcraft which often seemed to ‘miss’ and not collapse the pram correctly. Hence I am glad we didn’t just do an online purchase.

By now it was well past lunch time and I needed food (this is a general issue for me, now even more so now that I am pregnant, hee, hee!), plus James and I were a little overwhelmed about choosing a pram and a carseat… Or an infant capsule (only good to six months age, but advantage of being able to clip capsule out of car and plonk onto pram base if baby is sleeping)… So many decisions!! We discussed things over lunch and thought we had decided to go with the Bebe Care Rverse XLR plus the Safe N Sound Meridian carseat. 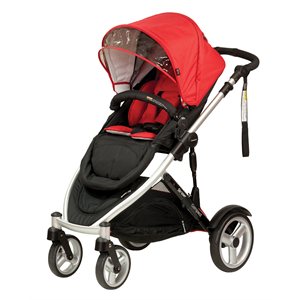 Back to Baby Bunting to do some more pram test driving and another sales assistant came over to help us. We told her our decision (at least we thought it was our decision) to go for the Bebe Care pram. She gave us some more advice and also showed us some other differences between the two prams that we hadn’t noticed earlier, plus gave us a little tip to make the Steelcraft pram fold down clip work properly – aaaaahhhh, so much better when you do it properly. She had me (particularly as I was still having issues getting the Bebe Care to collapse properly) and James was happy if I was happy, so decision flip and it was the Steelcraft Strider Compact that won out.

Carseats… The sales assistant was very helpful and suggested we actually place the carseat we thought we wanted into our car (which we had chosen as it exceeded Australian Safety Standards). Despite having a Subaru Outback which I thought was pretty roomy, once the carseat was in the car, the passenger seat had to be pushed almost all the way forward – not good for James and I as we are both quite tall. So thumbs down for that one. She suggested another model which was also very well rated in terms of safety and it was a much better fit, although my days of having the passenger seat fully extended back and reclined will be over in future!

So in the end we got the Steelcraft Strider Compact, Safe N Sound Compaq Carseat, a Baby Bjorn Miracle Baby Carrier, pus new mattresses for the cot and bassinet we were given. Phew!! Luckily both the pram and Baby Bjorn were on special, so saved some $$ there…

And now I am shattered and shall be retiring to the couch with a cup of tea and watching the football as James’ Bombers are playing.

Does anyone out there have any experience with either the pram we ended up buying (Steelcraft Strider Compact) or the one that we rejected (Bebe Care Rverse XLR)?