We decided to try a new recipe tonight and ended up with this one thanks to Donna Hay with a few minor variations. Unfortunately we were both too hungry to consider taking a picture and we just scoffed it down.

With the use of shop-bought curry paste and naan this is a super quick, easy and delicious meal. Our version, where we decided to make our own Naan Bread was also pretty quick and easy but just required a bit of early preparation to allow the Naan time to rise. The juices from the lamb mix with the yoghurt, chilli and mint, and then soak into the naan. Delicious!!!

We are sure that this one will appear on weeknight menus again in the future. 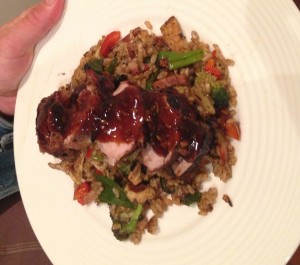 These barbecue pork fillets work fantastically with fried rice.  This can be a meal all by itself or served as part of a bigger spread of dishes.

I first received a variation of this recipe during some cooking classes that I did many years ago in Canberra.  I’m still cooking many of the recipes I learned in this class with slight variations and my thanks go out to Nancy and her fabulous Asian flavours.

My delight in all things cake like for breakfast continues…  I wonder if that will change once Eggbert makes an appearance and I can once again eat poached eggs??  I’ll let you know!  In the meantime, here is a simple recipe for yummy hotcakes. 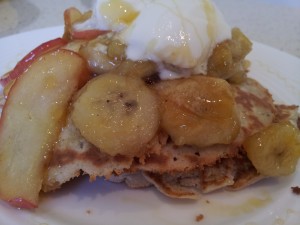